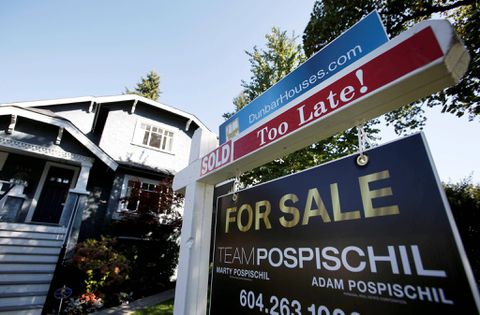 The Canadian Real Estate Association released year-end numbers on Monday, reporting the national benchmark home price was $600,300 in December, up 9.1 per cent from a year earlier, according to the MLS Home Price Index.

Bank of Montreal economist Robert Kavcic said that while volume of home sales fell 7.6 per cent in December in the GTA compared with a year earlier, the result was still a sharp improvement from midyear when sales were down as much as 40 per cent on a year-over-year basis.

Mr. Kavcic said rebounding demand has been met with new supply, as new listings in the GTA climbed 51 per cent in December compared with December, 2016, which is the largest increase in new listings ever on a seasonally adjusted basis.

The result is that growing supply has kept price increases in check, he said, and prices are unlikely to soar again soon after tougher new mortgage qualification stress-test rules took effect on Jan. 1.

"We still view fundamental supply-demand factors as very strong, which should contain the price declines soon," Mr. Kavcic said in a research note.

"However, the new [stress-test] measures and a shift to a rising-rate environment should prevent speculative froth from building again, and contain price growth to a reasonable pace for the remainder of the cycle."

Mr. Kavcic said regions such as Oakville-Milton may have seen prices fall on a year-over-year basis in part because they had higher-than-average levels of foreign investment, which has been affected by the new tax announcement in April.

On a national basis, the number of homes sold in December rose 4.5 per cent over November as sales climbed in 60 per cent of all major local markets during the month, including the GTA and Hamilton-Burlington. CREA said it was the fifth consecutive month of national sales growth, which shows Canada is "fully recovering" from the slump last summer.

But sales were still down 4 per cent nationally based on the total volume of sales throughout the year, which marks the worst performance for sales since 2010, said Toronto-Dominion Bank economist Rishi Sondhi.

TD is anticipating national sales will fall in 2018 from 2017, Mr. Sondhi said, as the new mortgage rules and interest-rate increases restrain growth, but is not forecasting a sharp market correction.

Mr. Sondhi said the GTA market has a relatively large share of uninsured mortgages that will be affected by new mortgage stress-test rules, which means January's report will be "all the more closely scrutinized" to try to assess the impact of the regulations.

CREA expects economic and job growth in 2018 will buoy sales this year. However, CREA chief economist Gregory Klump said national sales in December were also likely boosted by a rush to lock in purchases before the introduction of the mortgage stress-test rules, so sales could be affected in early 2018.

"It will be interesting to see if monthly sales activity continues to rise despite tighter mortgage regulations that took effect on Jan. 1," Mr. Klump said.

The MLS Home Price Index adjusts for the mix of home types sold during the year to provide a benchmark sales price. The average sale price in Canada, by comparison, rose 5.7 per cent in December to $496,532, which was significantly lower than the benchmark price. The average was pulled lower by the larger proportion of condominium sales compared with single-family homes, especially in the GTA.

Home sale prices fell in four of 14 major markets included in the MLS Home Price Index. Prices dropped 4 per cent in Regina in December compared with a year earlier, while Saskatoon recorded a 3.7-per-cent decline, Calgary saw a fall 0.4 per cent and prices in Oakville-Milton slipped 0.8 per cent.

Prices climbed 5.4 per cent in Greater Montreal in December compared with a year earlier, according to MLS Home Price Index, while Ottawa saw a 6.6-per-cent price increase.

Provided by: Janet McFarland with the Globe & Mail