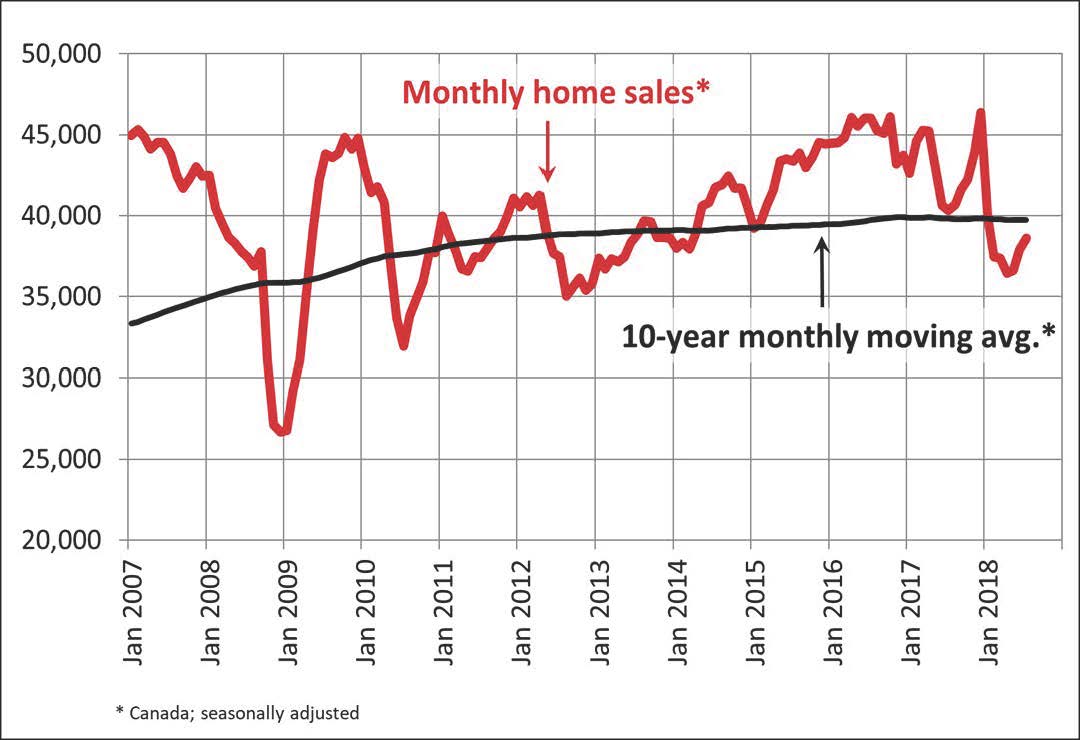 National home sales via Canadian MLS® Systems edged up by 0.9% in August 2018, marking a fourth consecutive monthly gain. However, sales activity is still running below levels in most other months going back to early 2014.

Roughly half of all local markets recorded an increase in sales from July to August, led again by the Greater Toronto Area (GTA), along with gains in Montreal and Edmonton.

Actual (not seasonally adjusted) activity was down 3.8% y-o-y in August, due mainly to declines in major urban centres in British Columbia.

“The new stress-test on mortgage applicants implemented earlier this year continues to weigh on national home sales,” said CREA President Barb Sukkau. “The degree to which the stress-test continues to sideline home buyers varies depending on location, housing type and price range. All real estate is local, and REALTORS® remain your best source for information about sales and listings where you live or might like to in the future,” said Sukkau.

The number of newly listed homes was unchanged between July and August, as new supply gains in the Greater Vancouver Area (GVA) and Montreal offset declines in the GTA and Winnipeg.

With sales up slightly and new listings unchanged, the national sales-to-new listings ratio edged up to 56.6% in August compared to 56.2% in July. The long-term average for this measure of market balance is 53.4%.

Based on a comparison of the sales-to-new listings ratio with the long-term average, about two-thirds of all local markets were in balanced market territory in August 2018.

The number of months of inventory is another important measure for the balance between housing supply and demand. It represents how long it would take to liquidate current inventories at the current rate of sales activity.

There were 5.2 months of inventory on a national basis at the end of August 2018, right in line with the long-term average for the measure.

As of this release, housing market coverage for MLS® HPI now includes Hamilton-Burlington and the Niagara Region.

Trends continue to vary widely among the 17 housing markets tracked by the MLS® HPI. Home price gains are diminishing on a y-o-y basis in the Lower Mainland of British Columbia (GVA: +4.1%; Fraser Valley: +10.7%). Prices in Victoria were up 8.5% y-o-y in August. Elsewhere on Vancouver Island, prices climbed 13.6%.

The MLS® HPI provides the best way of gauging price trends because average price trends are strongly distorted by changes in the mix of sales activity from one month to the next.

The actual (not seasonally adjusted) national average price for homes sold in August 2018 was just over $475,500, up 1% from the same month last year.