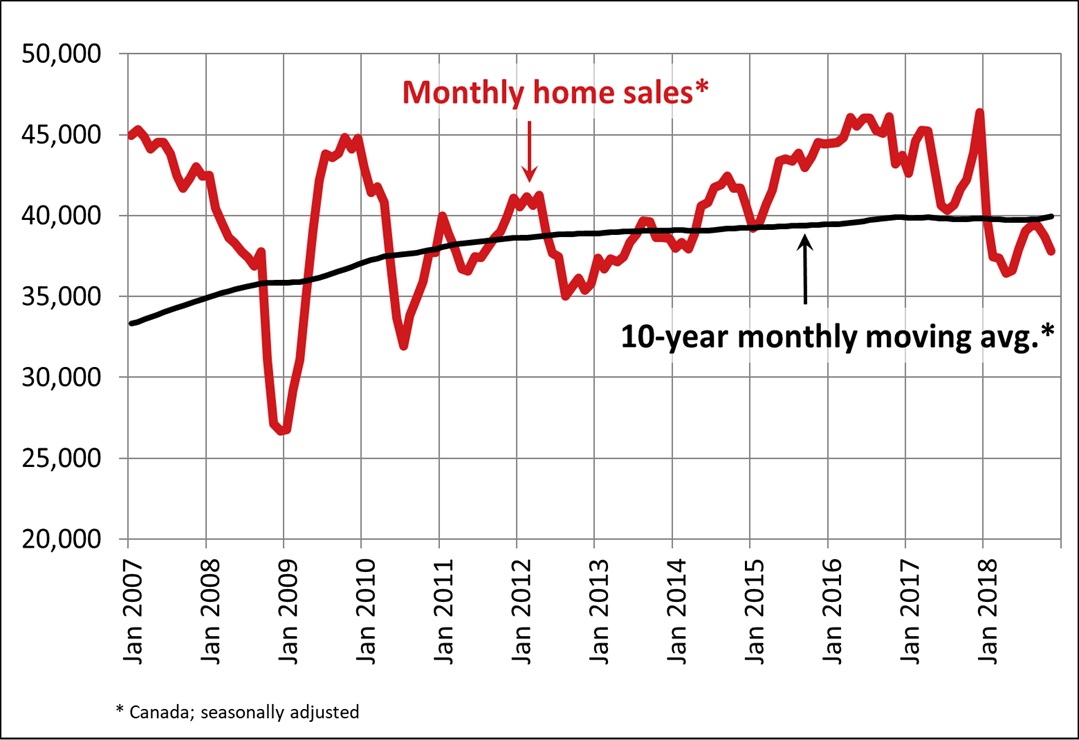 Home sales via Canadian MLS® Systems fell by 2.3% in November 2018, adding to the decline in October of 1.7%. While the number of homes trading hands is still up from its low point in the spring, it remains below monthly levels posted from 2014 through 2017.

Transactions declined in just over half of all local markets, with lower activity in the Greater Toronto Area (GTA), the Greater Vancouver Area (GVA) and Hamilton-Burlington offsetting increased sales in Edmonton.

Actual (not seasonally adjusted) activity was down 12.6% y-o-y and came in below the 10-year average for the month of November. Sales were down from year-ago levels in three-quarters of all local markets, including the Lower Mainland of British Columbia, Calgary, the GTA and Hamilton-Burlington.

“National sales activity has lost a bit of momentum over the past couple of months, but local market trends can be, and very often are, different by comparison,” said CREA President Barb Sukkau. “All real estate is local. A professional REALTOR® remains your best source for information and guidance in negotiating the purchase or sale of a home during these changing times,” added Sukkau.

“The decline in homeownership affordability caused by this year’s new mortgage stress-test remains very much in evidence,” said Gregory Klump, CREA’s Chief Economist. “Despite supportive economic and demographic fundamentals, national home sales have begun trending lower. While national home sales were anticipated to recover in the wake of a large drop in activity earlier this year due to the introduction of the stress-test, the rebound appears to have run its course.”

The number of newly listed homes fell by 3.3% between October and November, with new supply declining in roughly 70% of all local markets.

With new listings having declined by more than sales in November, the national sales-to-new listings ratio tightened slightly to 54.8% compared to 54.2% in October. This measure of market balance has remained close to its long-term average of 53.4% since the beginning of 2018.

Based on a comparison of the sales-to-new listings ratio with the long-term average, about 60% of all local markets were in balanced market territory in November 2018.

The number of months of inventory is another important measure for the balance between sales and the supply of listings. It represents how long it would take to liquidate current inventories at the current rate of sales activity.

The Aggregate Composite MLS® Home Price Index (MLS® HPI) was up 2% y-o-y in November 2018. The increase is similar to gains posted since July.

Trends continue to vary widely among the 17 housing markets tracked by the MLS® HPI. In British Columbia, home price gains have been steadily diminishing on a y-o-y basis in the Fraser Valley (+4.7%) and Victoria (+7.2%). By contrast, price gains picked up elsewhere on Vancouver Island (+12.6%) and, for the first time in five years, were down (-1.4%) from year-ago levels in the GVA.

Among housing markets tracked by the index in the Greater Golden Horseshoe region, MLS® HPI benchmark home prices were up from year-ago levels in Guelph (+9.3%), the Niagara Region (+7.2%), Hamilton-Burlington (+6.3%), Oakville-Milton (+3.4%) and the GTA (+2.7%). Meanwhile, home prices in Barrie and District remain below year-ago levels (-2.1%).

Across the Prairies, benchmark home prices remained below year-ago levels in Calgary (-2.9%), Edmonton (-1.9%), Regina (-4%) and Saskatoon (-0.3%). Amid elevated supply relative to sales, the home pricing environment will remain weak in these housing markets until they become better balanced.

The MLS® HPI provides the best way to gauge price trends because average price trends are strongly distorted by changes in the mix of sales activity from one month to the next.

The actual (not seasonally adjusted) national average price for homes sold in November 2018 was just over $488,000, down 2.9% from the same month last year.