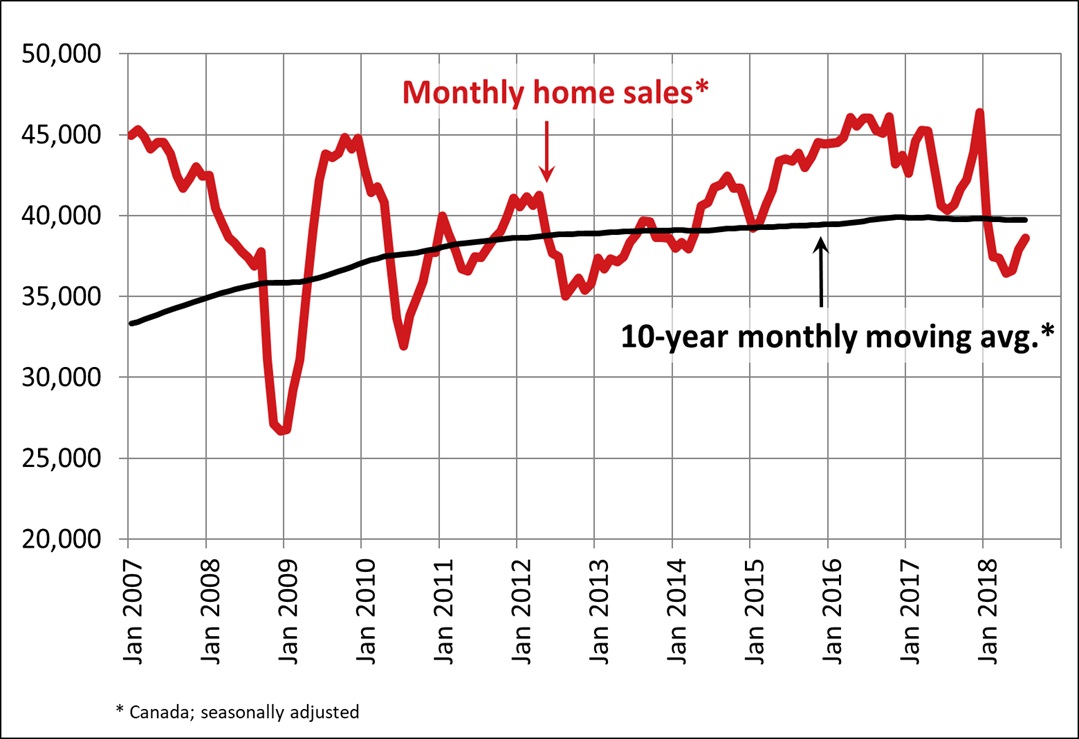 Statistics released today by The Canadian Real Estate Association (CREA) show national home sales were up from June to July 2018.

National home sales via Canadian MLS® Systems rose 1.9% in July 2018, building on increases in each of the two previous months but still running below levels recorded from mid-2013 to the end of last year (Chart A). Led by the Greater Toronto Area (GTA), more than half of all local housing markets reported an increase sales activity from June to July.

Actual (not seasonally adjusted) activity was down 1.3% y-o-y. The result reflects fewer sales in major urban centres in British Columbia and an offsetting improvement in activity in the GTA.

“This year’s new stress-test on mortgage applicants continues to weigh on home sales but its effect may be starting to fade slightly in Toronto and nearby markets,” said CREA President Barb Sukkau. “The degree to which the stress-test continues to sideline home buyers varies depending on location, housing type and price range. All real estate is local, and REALTORS® remain your best source for information about sales and listings where you live or might like to in the future,” said Sukkau.

“Improving national home sales activity in recent months obscures significant differences in regional trends for home sales and prices,” said Gregory Klump, CREA’s Chief Economist. “Regardless, rising interest rates and this year’s stress test on mortgage applicants will likely prove to be difficult hurdles to overcome for many would-be first time and move-up homebuyers, heading into the second half of the year and beyond.”

The number of newly listed homes retreated 1.2% in July and stood below monthly levels recorded over most of the past eight years. New listings were down in more than half of all local markets, led by Calgary, Edmonton and Greater Vancouver (GVA). Fewer new listings in these markets more than offset an increase in new supply in the GTA.

With sales up and new listings down, the national sales-to-new listings ratio tightened further to reach 55.9% in July. This reading nonetheless remains within short reach of the long-term average of 53.4% for this measure of market balance.

Considering the degree and duration to which market balance readings are above or below their long-term average is a useful way of gauging whether local housing market conditions favour buyers or sellers. As a rule of thumb, measures of market balance that are within one standard deviation of their long-term average are generally consistent with balanced market conditions.

Based on a comparison of the sales-to-new listings ratio with the long-term average, about two-thirds of all local markets were in balanced market territory in July 2018.

The number of months of inventory is another important measure for the balance between housing supply and demand. It represents how long it would take to liquidate current inventories at the current rate of sales activity.

There were 5.3 months of inventory on a national basis at the end of July 2018, down from 5.4 months in June and near the long-term average of 5.2 months.

The Aggregate Composite MLS® Home Price Index (MLS® HPI) was up 2.1% y-o-y in July 2018. This represents the first acceleration in y-o-y home price growth since April 2017. It also suggests that the dip in home prices last summer and their subsequent rebound in and around the GTA may contribute to further y-o-y gains in the months ahead.

Apartment units posted the largest y-o-y price gains in July (+10.1%), followed by townhouse/row units (+4.7%). By contrast, one-storey and two-storey single family home prices were again down from year-ago levels in July (-0.7% and -1.5% respectively) but the declines were noticeably smaller than in recent months.

Trends continue to vary widely among the 15 housing markets tracked by the MLS® HPI, with home prices up from year-ago levels in eight of them, little changed in two of them and down in the remainder.

MLS® HPI provides the best way of gauging price trends because average price trends are strongly distorted by changes in the mix of sales activity from one month to the next.

The actual (not seasonally adjusted) national average price for homes sold in July 2018 was just under $481,500, up 1% from the same month last year. This was the first year-over-year increase since January.