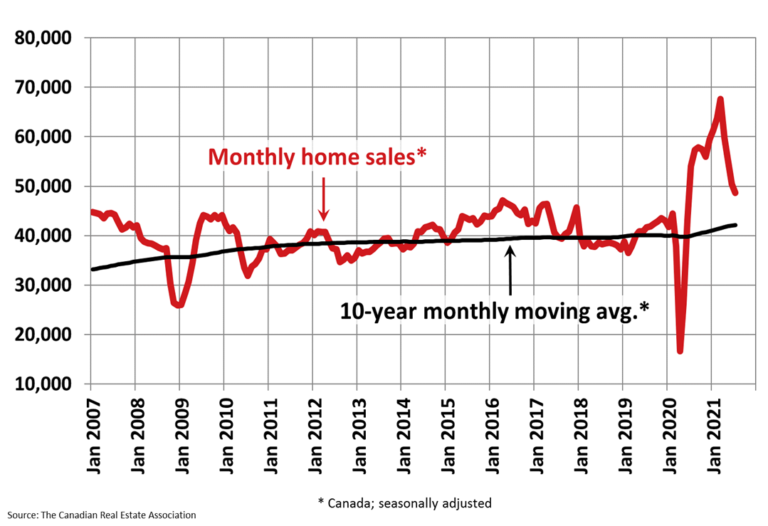 Statistics released today by the Canadian Real Estate Association (CREA) show national home sales were down between June and July 2021.

Home sales recorded over Canadian MLS® Systems edged back a further 3.5% on a month-over month basis in July 2021, marking the smallest of four consecutive declines since March. While sales are now down a cumulative 28% from that March peak, Canadian housing markets are still historically quite active.

Month-over-month declines in sales activity were less broad-based than seen in the past few months, although sales were still down in about two-thirds of all local markets. Declines were led by Edmonton and Calgary, although that may be because the current trend of softening sales is a little more recent in these markets. In a market like Montreal, where sales began to moderate way back at the start of the year, activity edged up month-over-month in July.

The actual (not seasonally adjusted) number of transactions in July 2021 was down 15.2% on a year-over-year basis from the record for that month set last July. July 2021 sales nonetheless still marked the second-best month of July on record.

“While the moderation of sales activity continues to capture most of the headlines these days, it’s record-low inventories that should be our focus,” said Cliff Stevenson, Chair of CREA. “We still have extremely unbalanced housing markets all over the country, so your best bet is to consult with your local REALTOR® for information and guidance about buying or selling a home in these still unprecedented and challenging times,” continued Stevenson.

“The slowdown we’ve seen in home sales over the last few months has not been surprising, given that the level of activity we were seeing back in March was unsustainable,” said Shaun Cathcart, CREA’s Senior Economist. “But we are not returning to normal, we are only returning to where we were before COVID, which was a far cry from normal. The problem of high housing demand amid low supply has not gone anywhere – it’s arguably worse. And after years of everyone agreeing that medium-density housing was the future, we are still referring to it as the ‘missing’ middle.”

The number of newly listed homes dropped by 8.8% in July compared to June, with declines led by a who’s who of big Canadian markets – the GTA, Montreal, Vancouver and Calgary. Across the country, new supply was down in about three-quarters of all markets in July.

Based on a comparison of sales-to-new listings ratio with long-term averages, the tightening of market conditions in July tipped a small majority of local markets back into seller’s market territory, reversing the trend of more balanced markets seen in June.

Another piece of evidence that conditions may be starting to stabilize was the number of months of inventory.  There were 2.3 months of inventory on a national basis at the end of July 2021, unchanged from June. This is extremely low – still indicative of a strong seller’s market at the national level and in most local markets. The long-term average for this measure is twice where it stands today.

The Aggregate Composite MLS® Home Price Index (MLS® HPI) rose 0.6% month-over-month in July 2021, continuing the trend of decelerating month-over-month growth that began in March. That deceleration has yet to show up in any noticeable way on the East Coast where property is relatively more affordable.

Additionally, a more recent point worth noting (and watching) just in the last month or so has seen prices for certain property types in certain Ontario markets look like they might be re-accelerating. This could be in line with a re-tightening of market conditions in some areas. 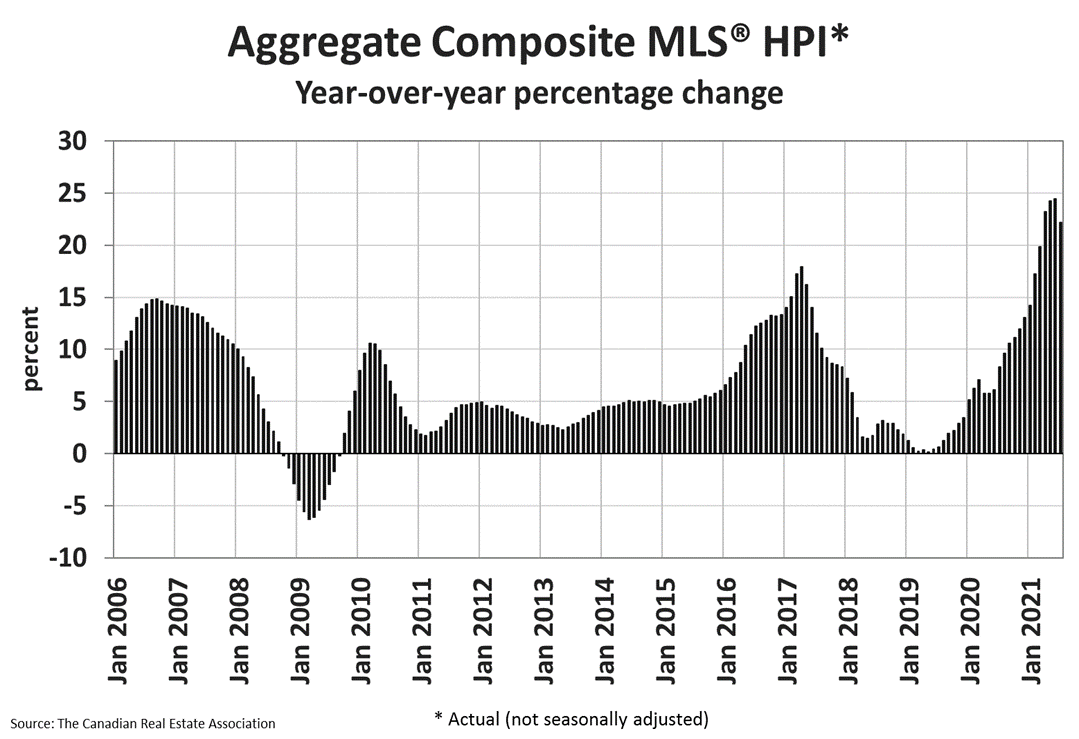 The non-seasonally adjusted Aggregate Composite MLS® HPI was up 22.2% on a year-over-year basis in July. While still a very large gain, it was, as expected, down from the record 24.4% year-over-year increase in June. The reason the year-over-year comparison has started to fall is that we are now more than a year removed from when prices really took off last year, so last year’s price levels are now catching up with this year’s, even though prices are currently still rising from month to month.

Looking across the country, year-over-year price growth is averaging around 20% in B.C., though it is lower in Vancouver, a bit lower in Victoria, and higher in other parts of the province. Year-over-year price gains a little under 10% were recorded in Alberta and Saskatchewan, while gains were a little over 10% in Manitoba.

Ontario saw year-over-year price growth slow to a still very high 25% in July. Trends observed in big, medium and smaller cities were similar to those in B.C., with gains notably lower in the GTA, around the provincial average in Oakville-Milton, Hamilton-Burlington and Ottawa, and considerably higher in most smaller markets in the province.

The opposite is true in Quebec, where Greater Montreal’s year-over-year price growth, at close to 24%, is double that of Quebec City at about 12%. Price growth is running a little above 30% in New Brunswick (higher in Greater Moncton, a little lower in Fredericton and Saint John), while Newfoundland and Labrador is in the 10% range on a year-over-year basis (a bit lower in St. John’s).