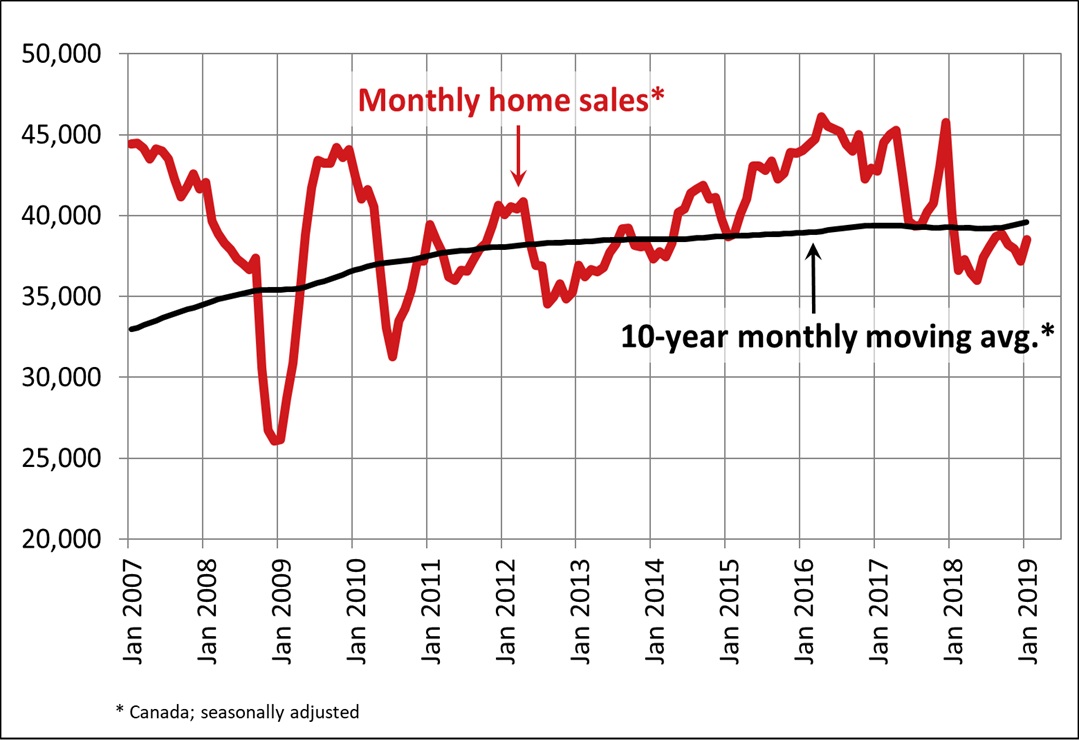 Statistics released today by the Canadian Real Estate Association (CREA) show national home sales in January 2019 were up from the previous month but remained below levels recorded one year ago.

Home sales via Canadian MLS® Systems climbed 3.6% in January 2019 compared to December 2018 (Chart A). The number of homes trading handswas up from the previous month in half of all local markets, led by Montreal, Ottawa and Winnipeg.

Actual (not seasonally adjusted) were down 4% from year-ago levels and turned in the weakest January since 2015. They also came in below the 10-year average for the month on a national basis and in Canada’s three westernmost provinces, Ontario and Newfoundland & Labrador.

“Homebuyers are still adapting to tightened mortgage regulations brought in last year, “said CREA President Barb Sukkau. “However, their impact on homebuyers varies by location, housing type and price segment. All real estate is local. A professional REALTOR®remains your best source for information and guidance in negotiating the purchase or sale of a home during these changing times,” added Sukkau.

“Sales, market balance and home price trends are out of synch among major Canadian cities that have the greatest impact on national results,” said Gregory Klump, CREA’s Chief Economist. “It’s clear that housing market conditions remain weaker in the Prairie region and the Lower Mainland of British Columbia. Notwithstanding the intended consequences, tighter mortgage regulations that took effect in 2018 combined with previous tightening will weigh on economic growth this year.”

The number of newly listed homes edged up 1% in January, led by a jump in new supply in Greater Vancouver and Hamilton-Burlington.

With sales up by more than new listings, the national sales-to-new listings ratio tightened to 56.7% compared to 55.3% posted in December. This measure of market balance has remained close to its long-term average of 53.5% for the last year.

Based on a comparison of the sales-to-new listings ratio with the long-term average, more than half of all local markets were in balanced market territory in January 2019.

The number of months of inventory is another important measure for the balance between sales and the supply of listings. It represents how long it would take to liquidate current inventories at the current rate of sales activity.

There were 5.3 months of inventory on a national basis at the end of January 2019, in line with its long-term average. That said, the well-balanced national reading masks significant regional differences. The number of months of inventory has swollen far above its long-term average in Prairie provinces and Newfoundland & Labrador; as a result, homebuyers there have an ample choice of listings available for purchase. By contrast, the measure remains well below its long-term average in Ontario and Prince Edward Island, consistent with seller’s market conditions. In other provinces, sales and inventory are more balanced. 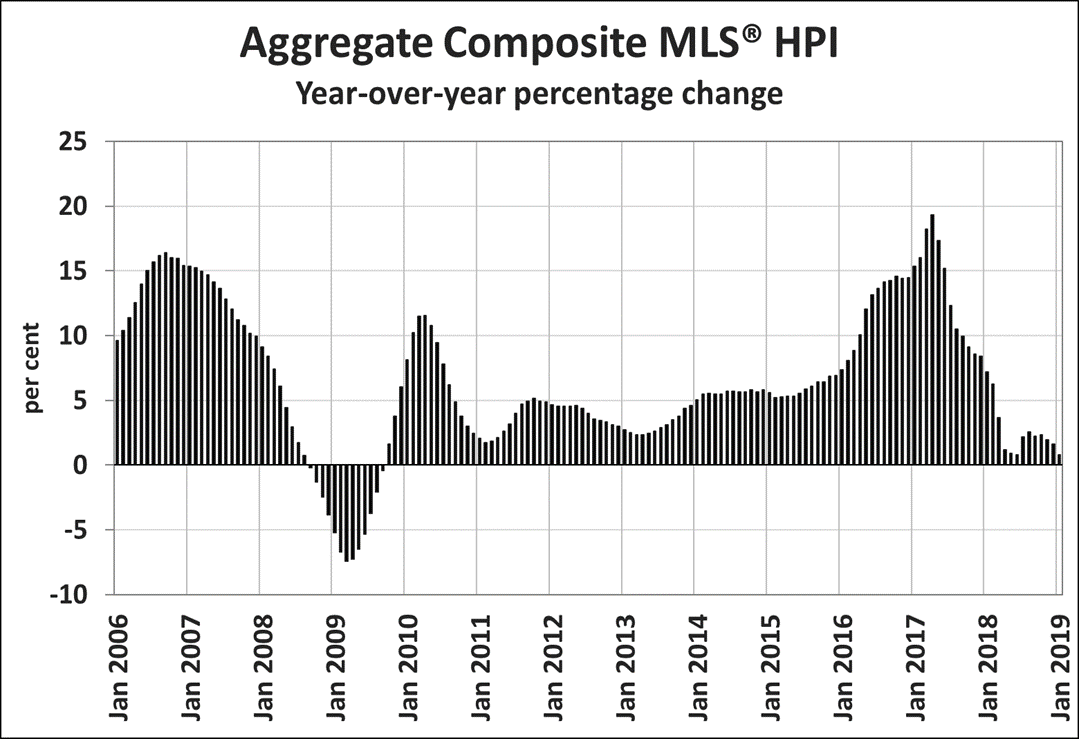 Trends continue to vary widely among the 17 housing markets tracked by the MLS® HPI. Results were mixed in British Columbia. Prices were down on a y-o-y basis in Greater Vancouver (-4.5%) and the Fraser Valley (-0.8%). By contrast, prices posted a y-o-y increase of 4.2% in Victoria and were up 9.3% elsewhere on Vancouver Island.

Among Greater Golden Horseshoe housing markets tracked by the index, MLS® HPI benchmark home prices were up from year-ago levels in Guelph (+7.2%), the Niagara Region (+7%), Hamilton-Burlington (+5%), Oakville-Milton (+3.9%) and the GTA (+2.7%). By contrast, home prices in Barrie and District remain below year-ago levels (-2.7%).

Across the Prairies, supply is historically elevated relative to sales, causing benchmark home prices to remain down from year-ago levels in Calgary (-3.9%), Edmonton (-2.9%), Regina (-3.8%) and Saskatoon (-2%). The home pricing environment will likely remain weak in these cities until elevated supply is reduced.

The MLS® HPI provides the best way to gauge price trends, as averages are strongly distorted by changes in the mix of sales activity from one month to the next.