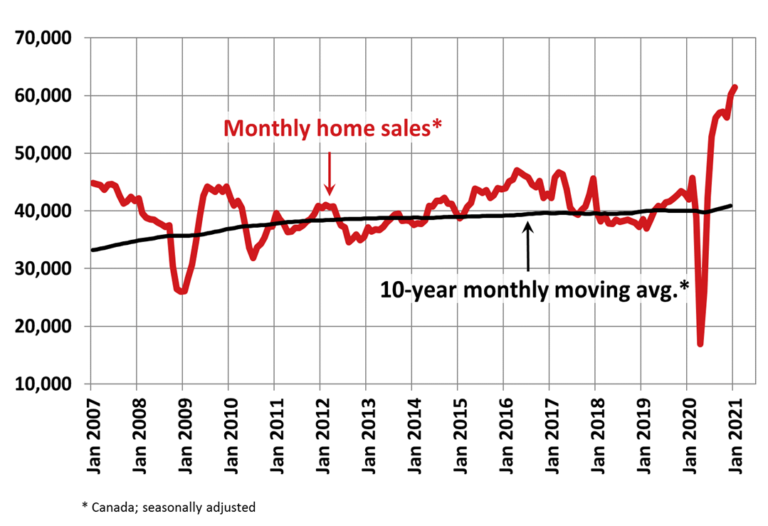 Seasonally adjusted activity was running at an annualized pace of 736,452 units in January, significantly above CREA’s current 2021 forecast for 583,635 home sales this year. Sales will be hard pressed to maintain current activity levels in the busier months to come absent a surge of much-needed new supply; although, that could materialize as current COVID-19 restrictions are increasingly eased and the weather starts to improve.

The month-over-month increase in national sales activity from December to January was led by a mixed bag of gains under the surface, including in Edmonton, the Greater Toronto Area (GTA), Chilliwack B.C., Calgary, Montreal and Winnipeg. There was more of a pattern to the declines in January. Many of those were in Ontario markets, following predictions that sales in that part of the country might dip to start the year with so little inventory currently available and many of this year’s sellers likely to remain on the sidelines until spring.

Actual (not seasonally adjusted) sales activity posted a 35.2% y-o-y gain in January. In line with activity since last summer, it was a new record for the month of January by a considerable margin. For the seventh straight month, sales activity was up in almost all Canadian housing markets compared to the same month the previous year. Among the 11 markets that posted year-over-year sales declines, nine were in Ontario where supply is extremely limited at the moment.

“2021 started off just like 2020 ended, with a number of key housing market indicators continuing to set records,” stated Costa Poulopoulos, Chair of CREA. “The two big challenges facing housing markets this year are the same ones we were facing last year – COVID and a lack of supply. It’s looking like our collective efforts to bring those COVID cases down over the last month and a half are working. With luck, some potential sellers who balked at wading into the market last year will feel more comfortable listing this year. As lockdowns are once again easing and the spring market begins to ramp up, we will remain vigilant in adhering to all the latest government and health officials’ directives to keep our clients safe. Now as always, REALTORS® remain the best source for information and guidance when negotiating the sale or purchase of a home,” continued Poulopoulos.

“The problem with this time of year is that the buyers and sellers that will in time define the Canadian housing story of 2021 are mostly all still waiting in the wings,” said Shaun Cathcart, CREA’s Senior Economist. “It’s the dead of winter and we’re only just starting to get the second wave of COVID under control. We’re unlikely to see a rush of listings until the weather and public heath situations improve, and we won’t see buyers until those homes come up for sale.

The best case scenario would be if we see a lot of sellers who were gun-shy to engage in the market last year making a move this year. A big surge in supply is what so many markets really need this year to get people into the homes they want, and to keep prices from accelerating any more than they already are.”

The number of newly listed homes dropped by 13.3% in January, led by double-digit declines in the GTA, Hamilton-Burlington, London and St. Thomas, Ottawa, Montreal, Quebec and Halifax Dartmouth. 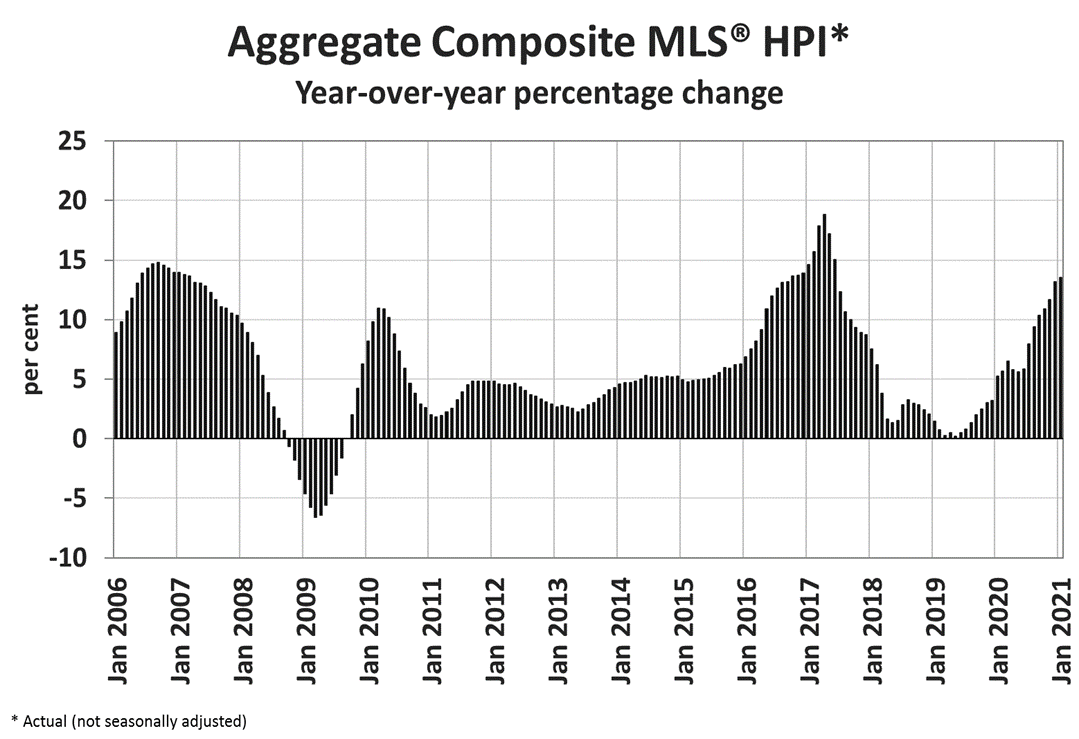 The non-seasonally adjusted Aggregate Composite MLS® HPI was up 13.5% on a y-o-y basis in January – the biggest gain since June 2017.

The largest y-o-y gains – above 30% – were recorded in the Lakelands region of Ontario cottage country, Northumberland Hills, Quinte & District, Tillsonburg District and Woodstock-Ingersoll.

This was followed by y-o-y price gains in the range of 20-25% in Hamilton, Guelph, Oakville-Milton, Bancroft and Area, Brantford, Cambridge, Kitchener-Waterloo, Peterborough and the Kawarthas, Ottawa and Greater Moncton.

Prices were up 16.6% compared to last January in Montreal. Meanwhile, y-o-y price gains were in the 10-15% range on Vancouver Island, Chilliwack, the Okanagan Valley, Winnipeg, the GTA and Mississauga. Prices rose in the 5-10% range in Victoria, Greater Vancouver, Regina and Saskatoon. Home prices were up 2% and 2.2% in Calgary and Edmonton, respectively.