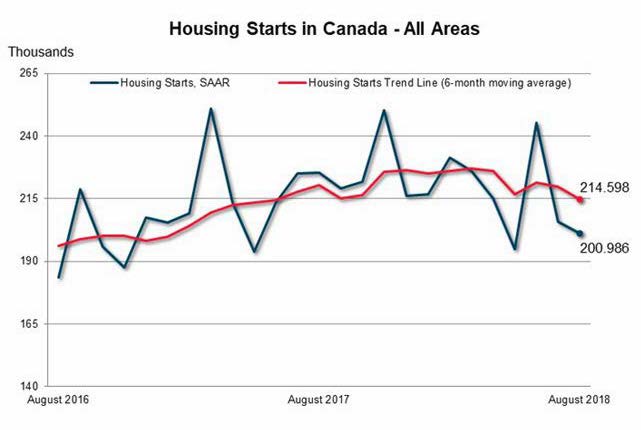 The trend in housing starts was 214,598 units in August 2018, compared to 219,656 units in July 2018, according to Canada Mortgage and Housing Corporaton (CMHC). This trend measure is a six-month moving average of the monthly seasonally adjusted annual rates (SAAR) of housing starts.

"The natonal trend in housing starts contnued to decline in August from the historical peak that was recorded in March 2018," said Bob Dugan, CMHC's chief economist. "This moderaton brings total starts closer to historical averages, largely refectng recent declines in the trend of mult-unit starts from historically elevated levels earlier in the year."

Vancouver
Housing starts in the Vancouver Census Metropolitan Area (CMA) trended higher in August 2018 as more multfamily projects got underway across the region. The cites of Vancouver and Burnaby led the way and accounted for over half of starts during the month due to a number of new condominium apartment projects. Demand for housing from residents remains strong and has resulted in the pace of new home constructon so far in 2018 moving ahead of the level recorded during the frst eight months of 2017.

Kelowna
Despite a very strong August for housing starts in the Kelowna CMA, the frst 8 months of 2018 have seen a decrease of 29% in the single-detached segment and 28% in the mult-unit segment, relatve to the record year of housing constructon seen in 2017. Despite this decrease in constructon actvity, the pace of housing starts in 2018 remains well above the 10-year average.

Edmonton
The trend measure for housing actvity in the Edmonton CMA moved upward signifcantly in August, driven by an increase in new constructon of mult-unit dwellings. Despite the rebound in constructon actvity in August, housing starts in the frst 8 months of the year remain approximately 7% below the pace of actvity of the same period in 2017, as builders deal with elevated inventories of completed and unsold units.

Windsor
Housing constructon in Windsor contnues to rebound from a slow frst half in 018. The trend in new housing
constructon grew for the third month in a row, with greater mult-unit constructon driving the increase. Year-todate housing starts were down by 27% compared to the same period last year, as the extraordinary levels of actvity seen in 2017 eased and moved closer to levels consistent with economic fundamentals.

Kingston
The August trend in Kingston CMA total housing starts declined slightly for the frst tme in the past fve months. Yet, it remained close to the high level seen during the last year. This strength comes of the heels of a strong year for housing starts in 2017 and thus far robust starts in 2018. Demand likely has been supported by the relatve afordability of all dwelling types compared to other Ontario CMAs.

In August 2018, year-to-date housing starts in the Saguenay CMA were up over the same period last year. However, the trends difered depending on the intended markets. In fact, in the freehold (single- and semi-detached) home segment, an increase in starts was recorded, likely supported by renewed growth in full-tme employment. Conventonal rental housing constructon was down, partcularly because of a relatvely high vacancy rate and a net migraton defcit.

Halifax
While constructon actvity on the single-detached market remained stable year-over-year, multples starts this
month have more than doubled the levels recorded last August. Year-to-date, multples constructon has outpaced the same period in 2017 by 7%, with rental market demand contnuing to be impacted by growth in internatonaland interprovincial migraton into the Halifax CMA.

CMHC uses the trend measure as a complement to the monthly SAAR of housing starts to account for considerable swings in monthly estmates and obtain a more complete picture of Canada’s housing market. In some situatons analyzing only SAAR data can be misleading, as they are largely driven by the mult-unit segment of the market which can vary signifcantly from one month to the next.

Rural starts were estmated at a seasonally adjusted annual rate of 16,061 units.

Preliminary Housing Starts data are also available in English and French through our website and through CMHC’s Housing Market Informaton Portal . Our analysts are also available to provide further insight into their respectve markets.

As Canada’s authority on housing, CMHC contributes to the stability of the housing market and fnancial system, provides support for Canadians in housing need, and ofers objectve housing research and informaton to Canadian governments, consumers and the housing industry.