Cost-conscious parents buying condos for kids studying away from home 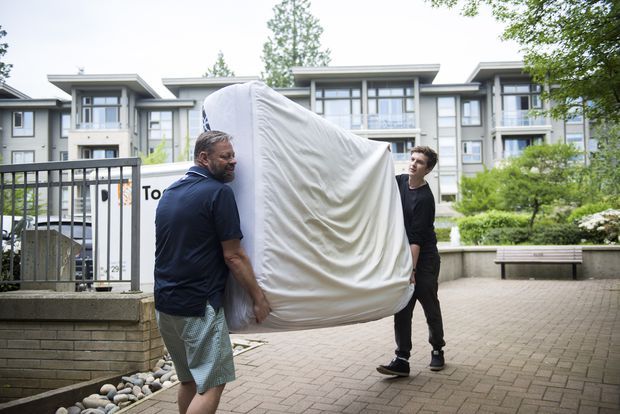 The idea of shelling out $70,000 or more for rent in four years while their children were at university was something two Canadian fathers – thousands of miles apart

So Tim Morrison, who runs a GM dealership in Burlington, Ont., and Marcel Laforce, a software engineer who lives in Cloverdale, B.C., both did what felt like the smarter financial move.

They bought condos for their away-from-home students near the universities they are studying at.

It’s a concept that some people have only heard of recently and more as a phenomenon among parents of international students. (And, in Vancouver, that phenomenon has generated suspicion, among the general anger over high housing prices, about expensive houses listed as being owned by “students.”)

But the trend is not limited to offshore families.

While the idea of parents buying apartments for their children was unheard of when Mr. Morrison and Mr. Laforce were students, they are part of a growing cadre of parents with kids at Canadian universities who have decided that buying is better than renting for many reasons.

“We did the math. Where we landed was that buying was the same cost as renting except for condo fees,” said Mr. Laforce, who helped his 19-year-old son, about to enter second-year computer science, move in just last month. And that’s not factoring in how much the value of the condo might go up in the four years.

That can be a big plus.

Mr. Morrison, who bought a condo near Vancouver’s Simon Fraser University for his daughter, Riley, two years ago for $348,000, has seen its assessment increase by 20 per cent already.

Like Mr. Laforce, he says, “Do the math on it and you’ll find it makes a whole lot of sense. And money’s pretty easy to come by these days.”

While no one has definitive numbers showing how common it is, realtors and university officials say it’s been a small but steady part of the market for several years – and one that’s accelerated recently in places where rents have suddenly increased.

“The last two or three years, I’ve done more of this at Simon Fraser University,” realtor Hafez Panju says. Rents are now approaching the $1,600 to $1,800 region. Mr. Panju handles about 20 per cent of sales at SFU’s residential subdivision, UniverCity. Out of that, about a third of his sales last year were to parents buying accommodation for their children.

Those parents span the range from single mothers to wealthy couples, families in White Rock, B.C., and Victoria to families in India and China.

“I know people who made more money on their condo than the tuition cost. It’s a nice way to finance it,” said Gordon Harris, the CEO of SFU Community Trust, the agency that owns and develops UniverCity. “In a high-cost market, if people can afford to do that, it might be a very viable strategy.”

While it’s not at all the custom for families in China to buy condos for their children at university there, in spite of the current real-estate mania in many Chinese cities, many families see it as almost essential to buy when their children come to study in Canada.

The tight rental housing market in Vancouver and Toronto makes many of them, like Canadian parents, nervous that their children won’t be able to find a place to live.

And they also factor in the hard reality that their children may stay abroad.

“They don’t expect their children to come back and live them,” says Carrie Law, CEO of the powerhouse Chinese firm Juwai that specializes in real-estate investments around the world for Chinese clients, speaking from Shenzen. “I don’t think my daughter is coming back at all, so I should buy an apartment and then I can visit.”

Canadian families also ponder a long game too, when they consider buying.

Mr. Morrison said once his daughter has finished university, he and his wife will hold on to the unit and probably move into it themselves at some point when they are retired. (They didn’t do that with the condo they bought for their son when he went to the University of Toronto some years ago; that got sold soon after he graduated.)

Mr. Laforce is also looking at hanging on to his son’s unit as an investment rental.

“I don’t think it would work out as a short-term investment. Our plan is to keep it at least 15 years.”

That’s the advice that professionals gives. National Bank, for example, has an article on its website advising parents planning to buy apartments for their children that they aren’t likely to make much of a profit if they hold the unit only for the few years their child is in university.

“Many financial planners would agree that it is really too short a period of time to realize enough of a return after the expense of holding and then selling to make it worthwhile,” said the article, while touting the advantages of investing in real estate around universities where enrolments are increasing all the time.

While they get a break when buying because banks only require 10 per cent down for a second home, as opposed to 20 per cent for an investment property, there are other downsides.

Mr. Laforce said that he didn’t even consider buying a condo for his older daughter

when she went to the University of B.C. several years ago because the prices for apartments near there are so much higher than at SFU.

“The rent is the same in both areas, but the purchase cost is way different at UBC,” he said.

As well, there are all of the tax implications to consider, both the usual ones (capital gains on second homes, tax to be paid on rental income) and then new ones that have been recently introduced in B.C. such as the foreign-buyer tax, the so-called speculation tax and Vancouver’s empty-home tax.

Both the Morrisons and the Laforces have their children’s names on the apartments. Mr. Morrison has his lawyer verifying that his daughter will qualify as a B.C. resident, so that no additional taxes beyond the standard ones will apply.

Mr. Panju said that’s something Canadian parents have more leeway with, while his offshore buyers don’t.

He had the unlovely task two years ago of phoning a mother in India who had bought an apartment for her son to inform her that she was going to have to pay an additional $56,000 in tax or lose her $60,000 deposit.

However, the potential complications are still seen as minimal by many enthusiastic buyers.

Mr. Panju continues to see lots of interest, even among those who might not seem like prime candidates.

“I’ve got clients taking out lines of credit on their own homes so they can do this.”