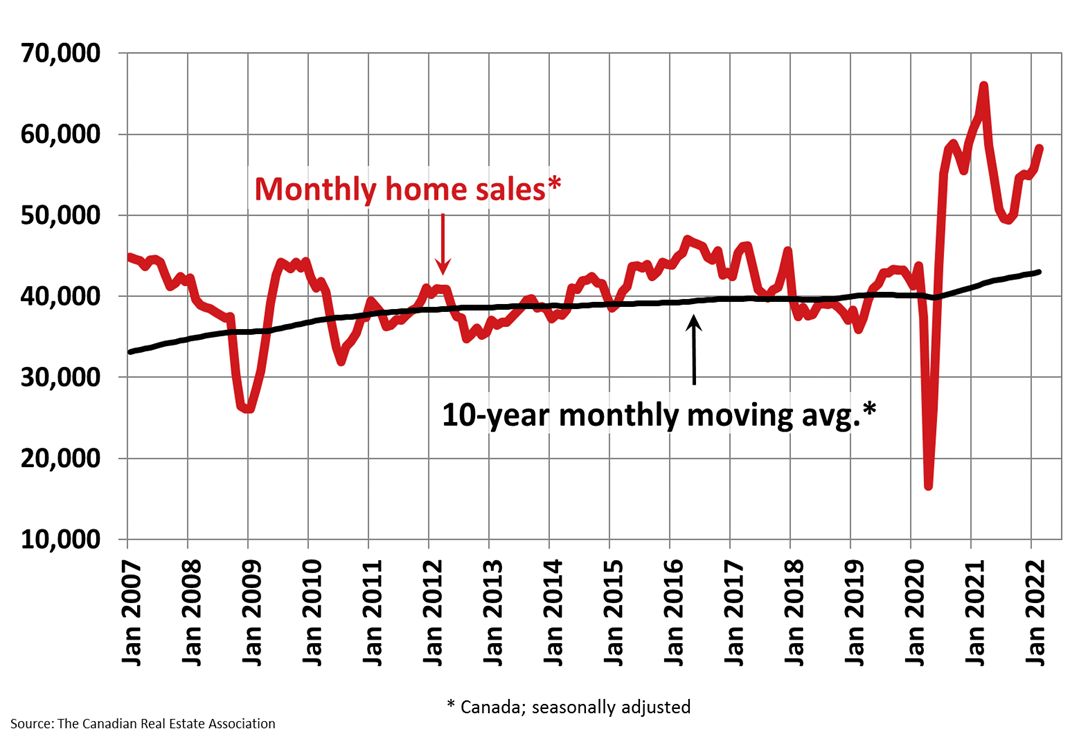 Statistics  released today by the Canadian Real Estate Association (CREA) show national home sales were up in February 2022 as buyers jumped on the first batch of spring listings.

Home sales recorded over Canadian MLS® Systems climbed 4.6% between January and February 2022. The monthly increase in activity was likely the result of a rebound in new listings in February following big a decline in January. As such, stronger activity may persist as late-February new listings continue to sell in March.

Sales were up in about 60% of local markets in February, led by some big jumps in Calgary and Edmonton, as well as a gain ahead of the national increase in the GTA.

The actual (not seasonally adjusted) number of transactions in February 2022 came in 8.2% below the monthly record set in 2021. That said, as was the case in January and throughout the second half of 2021, it was still the second-highest level on record for that month.

“As expected, after a bit of a lull in January, we saw the first batch of spring 2022 listings come to market in February, and they were quickly scooped up by buyers” said Cliff Stevenson, Chair of CREA. “It’s unclear if this is the beginning of a re-emergence of some of the many would-be sellers who have been dormant for the last two years, or if the supply will fade towards the summer like it did in 2021. Either way, your best bet is to contact your local REALTOR®, who has the information and guidance you’ll need if you are planning on entering the market in 2022,” continued Stevenson.

“New supply bounced way up in February, which is similar to what we saw play out in 2020 and again in 2021,” said Shaun Cathcart, CREA’s Senior Economist. “The real question is what comes next? In the short term, expect at least one more month of stronger sales as the majority of those new listings came onto the market near the end of the month so many of the associated sales likely won’t happen until early March. Ideally, listings will continue to come out in big numbers in the months ahead. Combined with higher interest rates and higher prices, we could be at a turning point where price growth begins to slow down and inventories finally begin to recover after seven years of declines. Still, in order to turn this market back towards balance long-term, building more new homes across the spectrum remains the key.”

The number of newly listed homes rebounded by 23.7% on a month-over-month basis in February following a 10.8% drop in January. The monthly increase was led by large gains in the GTA, Calgary and the Fraser Valley.

There were just 1.6 months of inventory on a national basis at the end of February 2022 — tied with January 2022 and December 2021 for the lowest level ever recorded. The long-term average for this measure is a little over 5 months.

In line with some of the tightest market conditions ever recorded, the Aggregate Composite MLS® Home Price Index (HPI) was up a record 3.5% on a month-overmonth basis in February 2022. 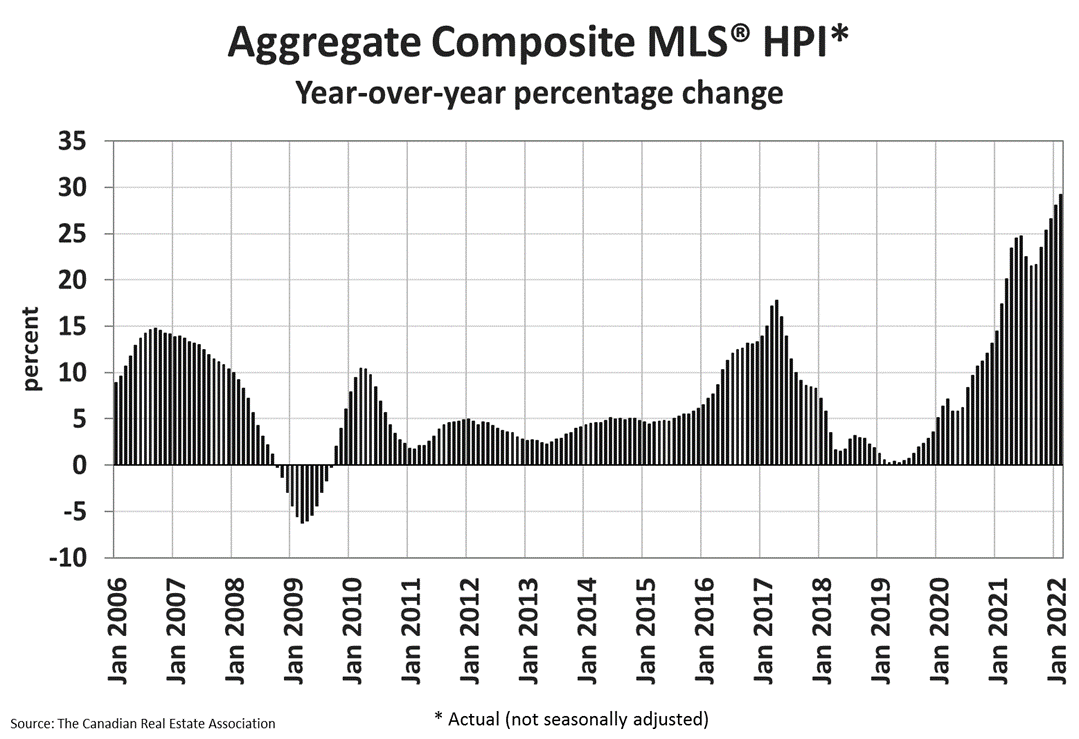 The non-seasonally adjusted Aggregate Composite MLS® HPI was up by a record 29.2% on a year-over-year basis in February.

This month, Nova Scotia and WindsorEssex join the MLS® HPI. With these latest additions, the MLS® HPI now covers all major Canadian cities in all provinces. The MLS® HPI provides the best way to gauge price trends because averages are strongly distorted by changes in the mix of sales activity from one month to the next.

Compared to the national year-over-year increase, gains remain about on par in British Columbia, lower in the Prairies and Newfoundland & Labrador, a little lower in Quebec and Prince Edward Island, and a little higher in Ontario, New Brunswick and Nova Scotia. The regional differences under the surface of those provincial numbers can be seen in the table below.