Generation Rent: 9 million Canadians don’t believe they will ever be homeowners 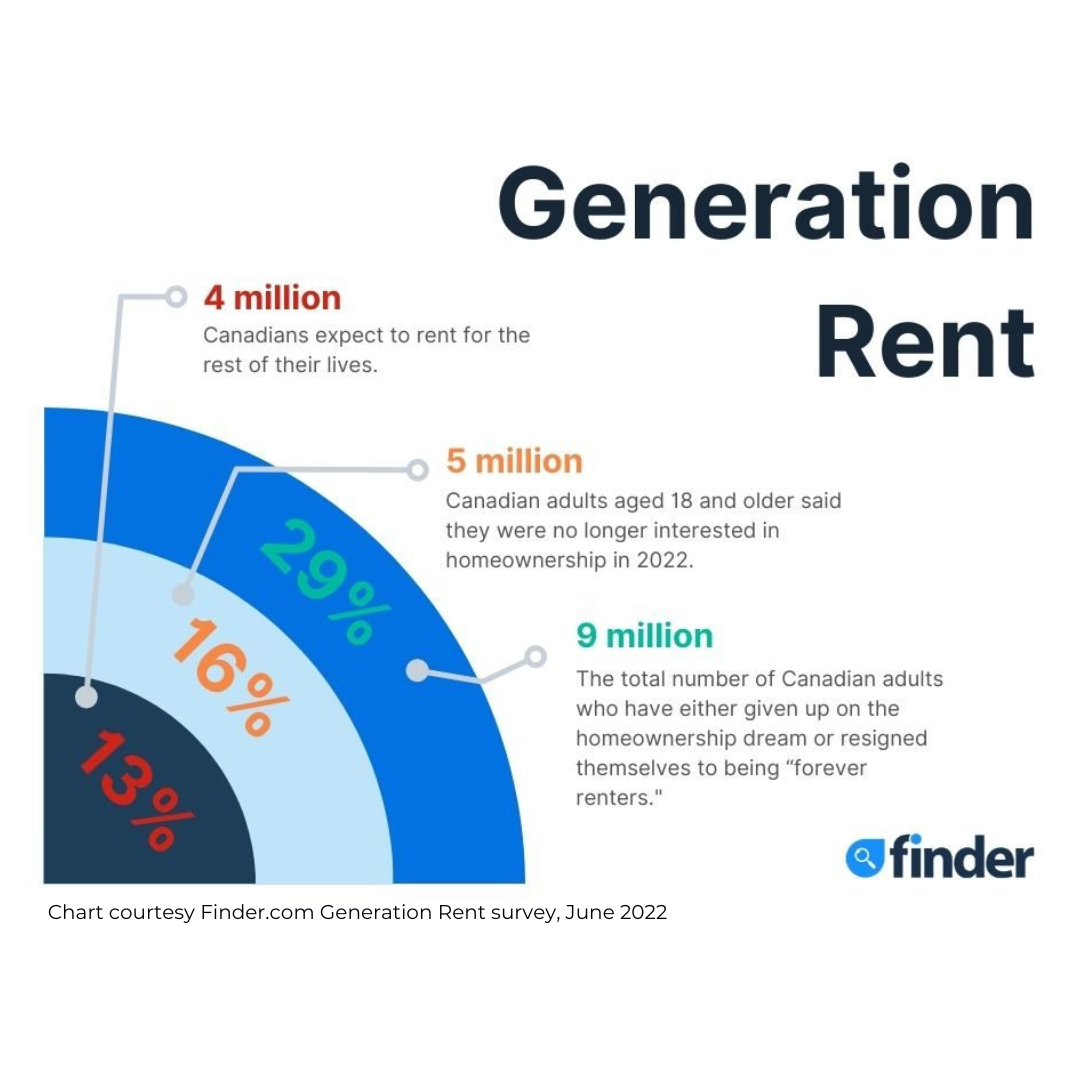 Is housing affordable in Canada?

Not according to the data. A new survey shows that approximately 9 million Canadians are settling to rent forever or completely giving up on the idea of homeownership.

This comes shortly after RBC Economics released a report showing that housing affordability in Canada is at its lowest in 31 years and hot on the heels of multiple mortgage rate hikes – making homeownership even more unaffordable.

In the new ‘Generation Rent’ survey, 29% of Canadians – approximately 9 million adults (18+) – have either given up on the homeownership dream or resigned themselves to being “forever renters”.

Shortly after the Bank of Canada’s most recent rate hike, Finder asked more than 1,200 Canadians about their home-buying intentions. Turns out 1 in 10 Canadians are optimistic about becoming a first-time home buyer within the next 5 years, but almost a third (29%) confessed that “renting forever” was a far more realistic option.

Data shows, 16% of Canadians – representing more than 5 million adults aged 18 and older – said they were no longer interested in homeownership in 2022. Another 13% (almost 4 million) said they expected to rent for the rest of their lives.

“Buying a home is a significant decision that requires a large emotional and financial commitment,” says Romana King, senior finance editor with fintech comparison platform Finder.com. “For many, the erosion of housing affordability combined with rising mortgage costs, means the barriers to homeownership appear almost insurmountable – and it’s turning a generation of Canadians into forever renters.”

What is the homeownership rate in Canada?

Over the last 2 years, the number of Canadians expecting to make the leap from renting to buying dropped.In 2020, almost a quarter (17%) of Canadians anticipated becoming first-time home buyers within 5 years.

“It’s important to help first-time home buyers, as they are the engine of the housing market,” says King. According to CMHC data, 53% of new mortgages in 2021 were due to first-time home buyer transactions. “Whether it’s educating buyers on the sales process, helping to define loan terms, implementing rebates and tax-free saving incentives or getting buyers the best mortgage rates – every little bit helps.”

Homeownership rates in Canada hover between 65% and 70%, with the latest data showing 68.5% owner-occupied homes in Canada, as of 2018, according to Statistics Canada. While this is a relatively high rate of homeownership, it appears that Canada lags behind similar countries, as measured through the Organisation for Economic Cooperation and Development (OECD). Based on data from the OECD, Canada’s homeownership rate is in the bottom third when compared to 38 other European, Eastern European and Scandinavian countries.

Women have slightly less desire than men for homeownership

According to survey data, women and men are almost on par in their resolve at renting forever – an attitude that didn’t shift much over the last few years, despite all the frothy sales activity in the real estate marketplace. However, the desire to become a homeowner did dwindle – with 17% of women reporting no interest in homeownership in 2022, up from 9% of women in 2020.

The survey results did show some surprising difference in attitudes towards homeownership among various age groups. For instance, the youngest potential homeowners – those aged 18 to 24 – were the most hopeful about homeownership. More than a third in this age group (34%) already owned a home with another 45% convinced they’d transition from renter to homeowner within the next 10 years. This age group was also the most interested in owning property, with only 8% declaring “no interest” in homeownership.