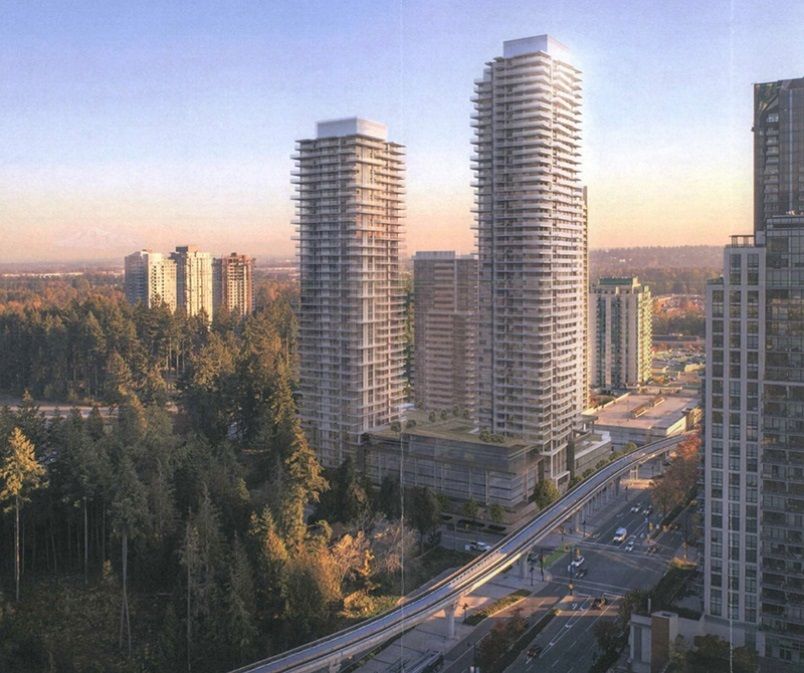 Onni seeks to build 49, 45 and 25 storey buildings at Glen Drive and Pinetree Way

Another three towers could be added to the Coquitlam City Centre skyline.

Monday, council sent to public hearing a proposal by the Onni Group to build the highrises on the southeast corner of Pinetree Way and Glen Drive

Onni is proposing towers of 49, 45 and 25 storeys, comprising 891 units, including 186 rental units in the smallest tower. Ninety-five of the 705 market condos will be three-bedroom units while 31 of the 186 rental units will have three bedrooms.

(The report recommended requiring the rental tower be occupied prior to the market condominium towers.)

The developer also proposes 72,000 sq. ft. of commercial space on a six-storey podium on Glen Drive, with eight retail units, four floors of offices and a daycare space accommodating 80 to 100 children. It would be next door to a 40-storey tower being built by Polygon at Glen and Westwood Street that was approved last year. Council gave the go-ahead to that project despite several speakers at a public hearing complaining the area would become “a concrete jungle.”

Coun. Bonita Zarrillo was the only councillor to oppose Onni’s application going to a public hearing, expressing concern about the many buildings and lack of access to family housing.

“This is far too quick of a change,” said Zarrillo. “I don’t think this is the time to do this type of zoning given the lack of family and entry-level housing.”

The proposal calls for a $250,000 public art feature, two car-share vehicles, bike repair rooms, parking for 1,329 vehicles and 1,166 bicycles. A staff report said more design considerations have to be developed with Onni including a more distinct look to the podium.

Onni plans to install a micro district energy system fuelled by natural gas to provide heating, cooling and hot water. A city report estimated the system would reduce gas and electrical usage by five to 20% and greenhouse gases by 10 to 25%.

Mayor Richard Stewart said he wonders if the system would become more common with development proposals but city manager Pete Steblin said they work best when one owner owns it long-term, which Onni proposes to do, with regulation by the BC Utilities Commission. Steblin said not many developers are interested in the systems and many have objected to municipalities making them mandatory.

“We have wanted to encourage it but we didn’t want to get in the space of running it,” said Steblin, who added it’s not often a developer proposes to install the system.

Provided by: Grant Granger for the Tri-City News

Photograph By CITY OF COQUITLAM